My contribution to my favorite festival, Bathhouse could be described as a blanket-hut that has grown up and gone to live in a pohutakawa tree. Like a childhood hut it had the pleasing sensation of playing at being enclosed, of being contained, but not completely. It seemed to evoke a sensation of being-with; being with a tree; a sea; a fluffy phallic soft-toy; a furry nest; a peaceful stranger.

It seemed to me that participants embraced the suggestion of a dwelling, playing at enclosure rather than complete enclosure, imagining being contained while also being with the land. This leads me to think that ‘dwelling’ in this situation is a verb – an activity of active being, a psychological state being entwined with the physically act of existing within a particular space 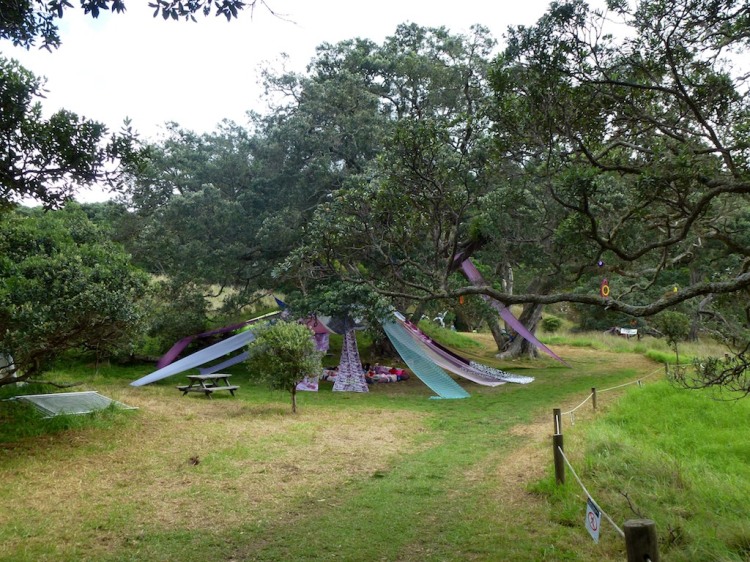 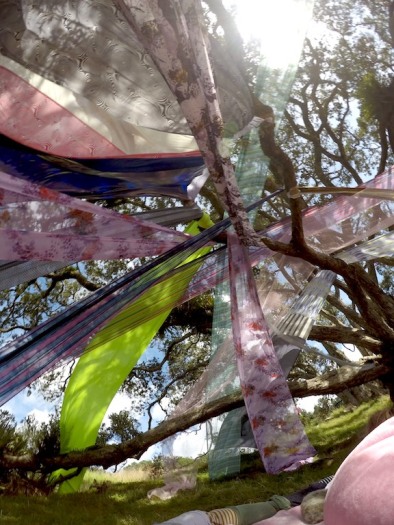 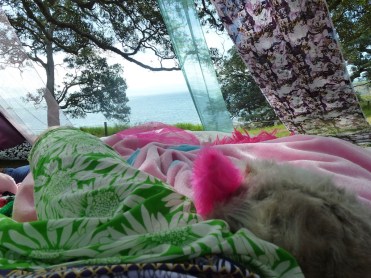 The risk with the project has always been possibility that it would be subsumed within the festival and be experienced as a site decoration, to be enjoyed but not reflected on in the way that an art project might be. From inception the project was designed to occupy the fine line between two pitfalls of festival art; that it might sit clumsily in the site, an art artefact transplanted awkwardly into a festival, or at the other end of the spectrum, reading as a design element within the festival. The challenge was to position the project as an integral part of the festival while retaining its own specificity; to locate it as a particular experiential zone within the festival. A hetrotopia within a hetrotopia so to speak.

Conversely, when an artwork achieves this balance within the context of Splore festival, it becomes a collaborative element within the larger project of Splore. I came to realise that the Bathhouse folded into, contributed to and was empowered by, the ongoing project of the Splore festival, which is to build a community that gathers once a year to celebrate alternative cultures that exist within the status quo of the wider culture. It provided a time-place where people come together to celebrate, dress up and party, but also to collectively re-imagine how we might live with one another, sustainably within this place; the spiritually active land of Tapapakunga, the island New Zealand and the biosphere of earth. Through twenty years of festivals Splore has become a culture, it operates as a wider entity that has its own life force, that each of the artist, musician and participant contribute to.

thank you everyone. It was a privilege to be there.